In this article, we introduce the hardware employed to fully utilize the capabilities of the Bosch process for deep etching of silicon. The equipment used for the Bosch process has many significant features that differentiate it from typical ICP etching tools.

Inductively Coupled Plasma (ICP) Source
First, let's take a look at the heart of the ICP equipment - the ICP coil that generates the plasma. The Bosch process must deliver both a high etch rate and a vertical profile that are critical for deep silicon etch processes. Increases in the fluorine radical density increases the etch rate. Also, attracting fewer ions, which are created by current in the plasma sheath, at a high voltage makes the profiles vertical. To achieve both high etch rates and vertical sidewalls, it seems that the voltage should be increased while maintaining ion density. However, RF power has the following equation:

The amount of etching of the passivation film on the bottom of the etch feature is proportional to the bias RF power (W). If the voltage (V) is increased while decreasing the current (I), the passivation film will be over-etched and the sidewall will have a reverse taper profile (Fig. 1). 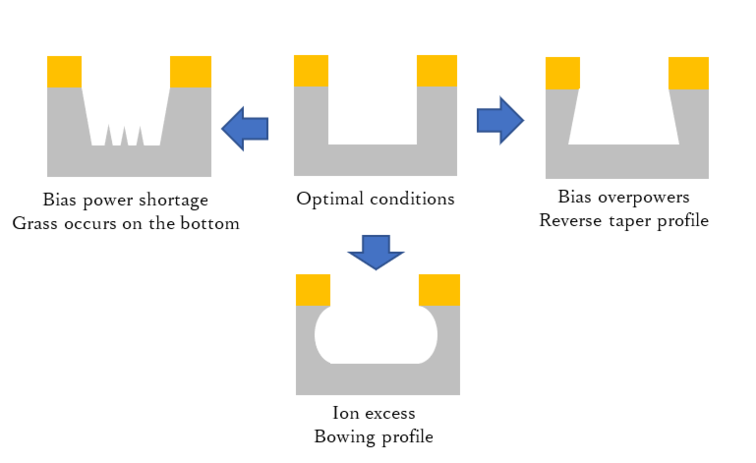 Fig. 1 Profiles processed by the Bosch process for each condition.

ICP etching equipment for the Bosch process generally uses cylindrical shaped ICP coils. There are two reasons for using a cylindrical ICP coil.. First, it is more efficient in delivering RF power to the plasma. Second, it is easier to control the ion and radical densities of the plasma.

In the case of the cylindrical ICP coil, high-density fluorine radicals and high-density ions are produced near the coil. However, due to the long distance between the ICP coil and the substrate, the ions are neutralized during transport to the lower/substrate electrode. As a result, the ion density in the plasma is drastically reduced. On the other hand, the fluorine radicals in the SF6 plasma are still being transported to the lower electrode while maintaining high density due to their long lifetime. 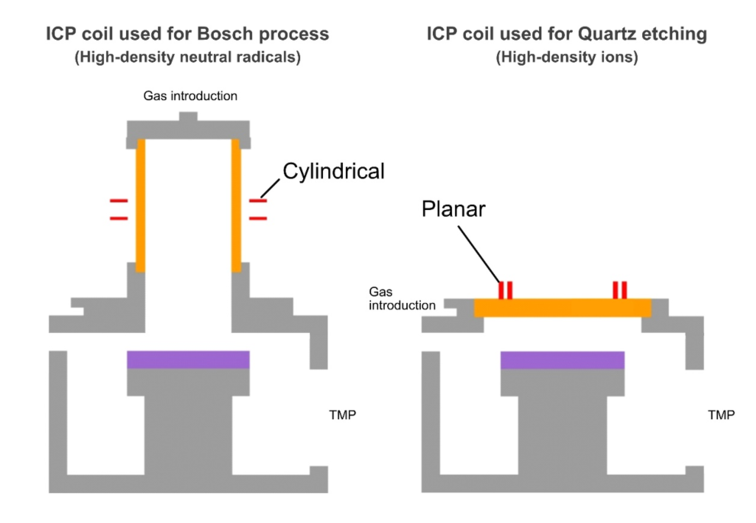 With the focus on generating high density plasma, the ICP power source should be at a higher frequency. However, at very high frequencies, it is difficult to keep a uniform plasma due to the effects of standing wave nodes and valleys. Therefore, 13.56 MHz is a good balance between the ability to generate high-density plasma and the capability to sustain a uniform plasma. Because of that, most equipment manufacturers use 13.56 MHz as the frequency of the ICP power source.

For substrate bias, lower frequency seems to be better in terms of the strength to attract the ions. However, the lower the frequency, the greater is the fluctuation of the ions incident on the substrate. Also, 13.56 MHz has an advantage over other frequencies in terms of cost and compactness. For these reasons, some equipment manufacturers select the 13.56 MHz as the frequency of the bias RF power source, while others select a lower frequency such as 400 kHz. In some cases, both frequencies may be combined or pulse superimposed.

Deposition/Etch Switching
To achieve fast Deposition/Etch process switching of the Bosch process, the gas must have a rapid switching speed. The response time of the MFC alone is not sufficient to achieve the 0.1 second Deposition/Etch process step switching commonly required for the Bosch process. Instead, fast gas switching is enabled by using a combination of an MFC and a high-switching speed valve. The gas line from the MFC to the ICP source should also be as short as possible. The increase in length of the gas line creates a damping effect that slows the response and tends to reduce the quality of the passivation films.

Next, the impedance switching control of the RF matching unit is important. During gas switching, the impedance of the plasma fluctuates greatly. If the matching unit cannot keep up with these fluctuations, the plasma is not sustainable. This means that the ideal Bosch process cannot be carried out if the RF matching unit cannot keep up with the fast gas switching. In addition, stringent control of the pressure in the reaction chamber is required to prevent pressure set point "hunting".

Turbo-Molecular Pump (TMP)
A less important item in other ICP etchers, but an important one in Si-DRIE, is the pumping speed of the TMP. The purpose of using TMP's with higher pump speeds in the Bosch process is to allow for higher flow rate of SF6 without increasing the process pressure. TMPs for the Bosch-process have a special rotor blade construction to prevent them from crashing due to collision with solid reaction products generated by the process.

What the Samco Si-DRIE Can Do?

Our systems have industry-leading process capabilities, and the product lineup covers both R&D and production.