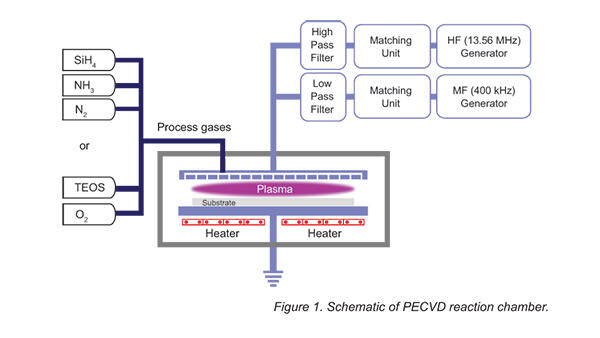 As a company that has been producing plasma enhanced chemical vapor deposition (PECVD) equipment since its founding in 1979, Samco is well versed in methods for creating dielectric films such as SiO2 and SiNx. Samco employs several techniques for controlling stress. Among these is dual-frequency PECVD which couples both the 13.56 MHz high frequency (HF) and 400 kHz medium frequency (MF) generator to the upper electrode of the reaction chamber (Fig.1). The two frequencies can either be superimposed or alternating (Fig.2). For SiNx films formed by the HF, the reaction is primarily due to radicals and tensile stress films are easily obtainable. The MF makes use of ion bombardment in the reaction, so SiNx films tend to be compressive. These characteristics allow the user to deposit SiNx films with arbitrary levels of stress by alternately depositing layers of with opposing stresses or by adjusting the relative power of the HF and MF.

Another development in CVD technology is the use of liquid precursor such as TEOS (tetraethylorthosilicate), a safer alternative to the gases silane and dichlorosilane. Samco developed LSCVD™ techniques using TEOS and other liquid precursors to form the high-density SiO2, SiNx, or other films. This report shows the solutions of combination dual-frequency PECVD and LSCVD™ techniques.